A man rowing on Lake Inle using the traditional one leg technique. I didn’t take any of the classic shots of the men fishing as they mostly seemed to be doing handstands for dollars – not particularly something I wanted to promote just for a posed photo

After saying goodbye to my parents and the beach, we moved on to a slightly more hectic type of holiday – full of traveling around and sightseeing. From Yangon we flew to Heho airport in Shan state where we then had a long and winding car journey through the hills to Nyaungshwe, a town on the edge of Lake Inle. Our friendly taxi driver took on the role of tour guide and kindly stopped at a beautiful old monastery on the way in to town, which would have missed otherwise. 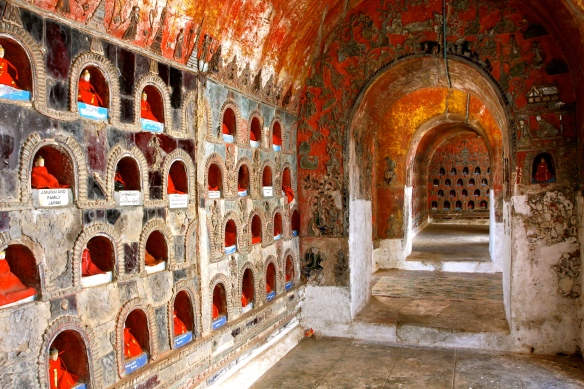 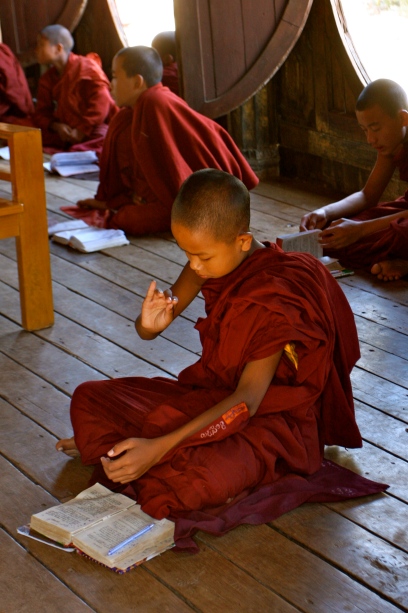 A rather bored looking novice monk at Shwe Yaunghwe Kyaung

In Nyaungshwe, our hotel had a boat ready for us and so on we hopped for the hour long boat journey halfway down the lake to our hotel – The Shwe Inn Tha. The boats’ engines are brutally loud, though one does get used to it.  The food at the hotel in the evenings was rather mediocre (a shame as one is held captive in the evenings as the boats can’t go out after dark), but the setting in the middle of the lake near many of the floating villages was perfect.

Sunrise from our floating bungalow at the Shwe Inn Tha Hotel

The next day we were up early and headed just around the corner by boat to Tha Ley village, home to the Phaung Daw Oo Paya, apparently one of the holiest religious sites on the lake and home to five ancient buddha images which have become blobs due to the constant application of gold leaf by devotees (only men are allowed near them). We were so early (7am) that we seemed to have beaten the hordes of tourists so we had the wet market to ourselves and of course all the locals doing their morning shop. There were lots of fascinating things from yellow bean tofu to peculiar fishy smelling discs (perhaps used like stock cubes?) and of course betel nut sellers. They still use very traditional scales – with the bizarre addition of batteries as a standard weight.  The ethnic minority Pa’O people were surprisingly obliging about having their photos taken and so it was really fun to wander around marveling at all the unusual products.

Pa’O lady at the wet market in Tha Ley village

Please click on any of the photos in the gallery below to enlarge or see a caption. 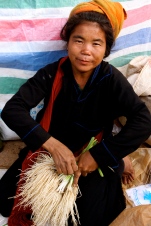 Onions – where the emphasis was the roots 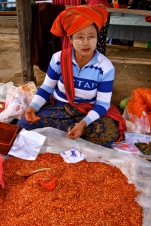 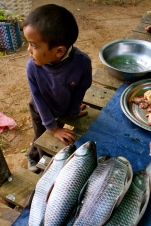 a boy and his fresh fish 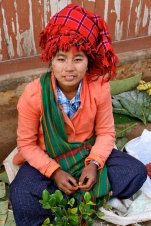 the most delicious breakfast snack

tomatoes grown on floating plots on the lae 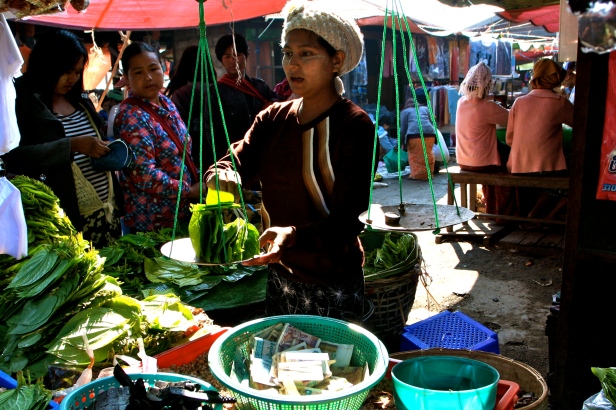 Extracting lotus fibers to then use for weaving 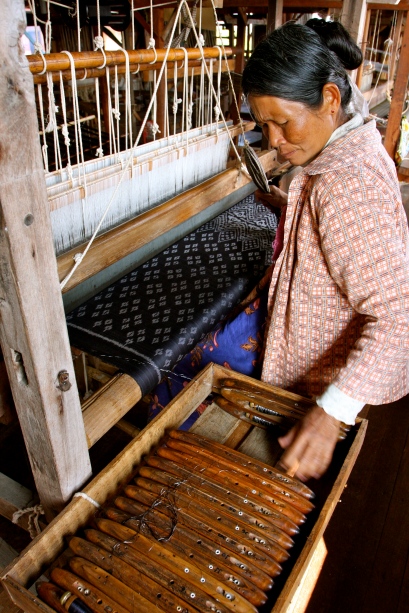 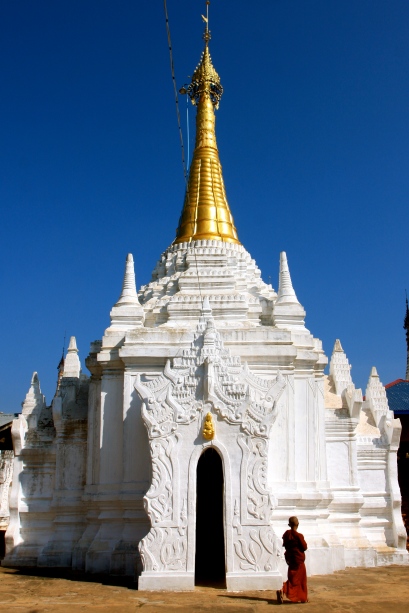 A temple in Ywama village

After lunch, we headed about 30 minutes up a creek to Inthein village – through canals, under bridges and past bathing buffalo. 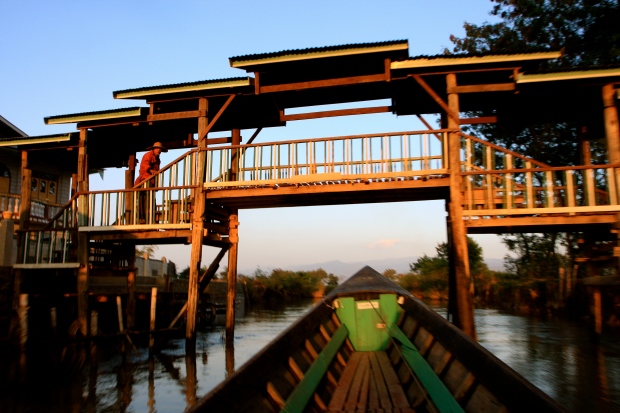 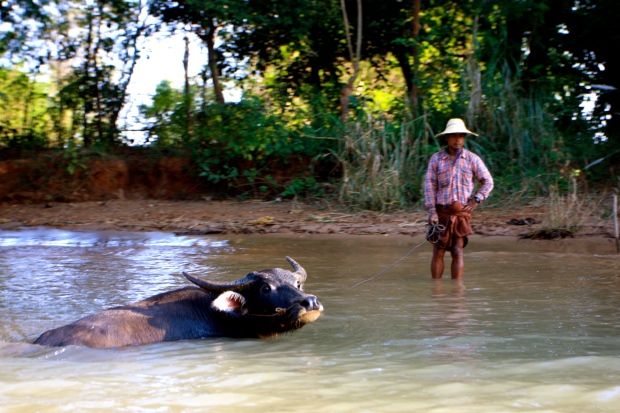 The guidebook warned of an overwhelming number of souvenir stalls, but compared to Vietnam or Thailand the ‘souvenirs’ were for the most part high quality crafts including a scattering of antique lacquer which we quickly got very excited about. It was quite a slow walk up the kilometer long colonnade to Shwei Inn Thein Paya on the top of the hill, as we kept stopping to look at pieces of antique lacquer along the way. We were so overwhelmed by some of the beautiful pieces that we ended up coming back the next day after having had a night to sleep on it. Pictures below are of the 1054 zedi which are scattered all over the hill.

On our way back down for the second time antiques in tow…. 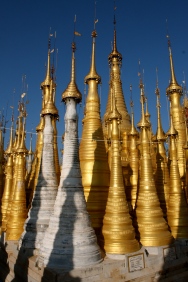 A thousand zedi dot the hill

Inthein village and creek just before the sun went down 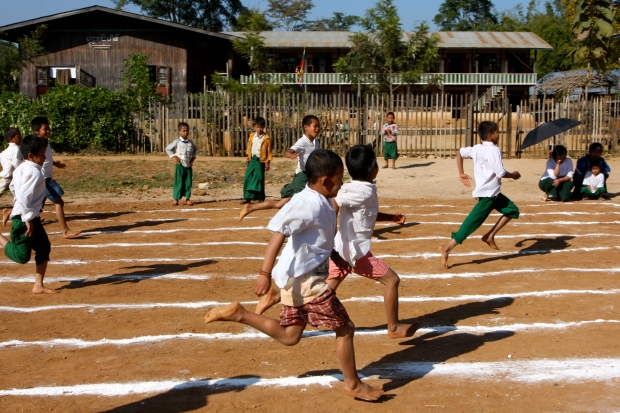 Earlier the local school children were having a sports day.

Although Inle Lake is becoming more touristy (and of course we were visiting at peak season), it is still a beautiful and interesting place to spend a few days. Has anyone travelled to the southern part of the lake which is meant to be more off the beaten track?

Up next – Inle Lake’s surprising vineyards!