Horse Races and the last days in the Altai Mountains 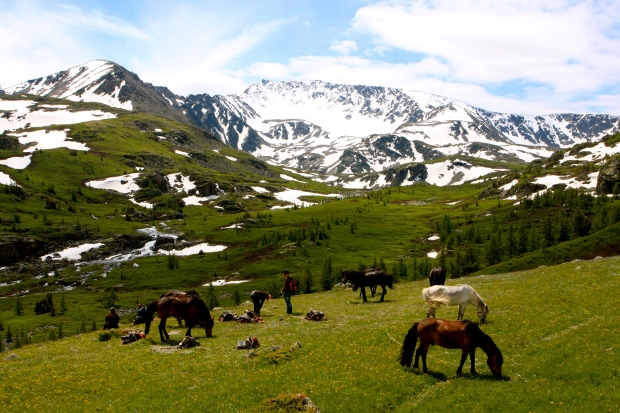 First thing in the morning we headed up through the larch forests, across some meadows and into a beautiful alpine valley dotted with wildflowers such as gentians and pansies. When it got steeper we tethered the horses and walked up to a lovely waterfall. 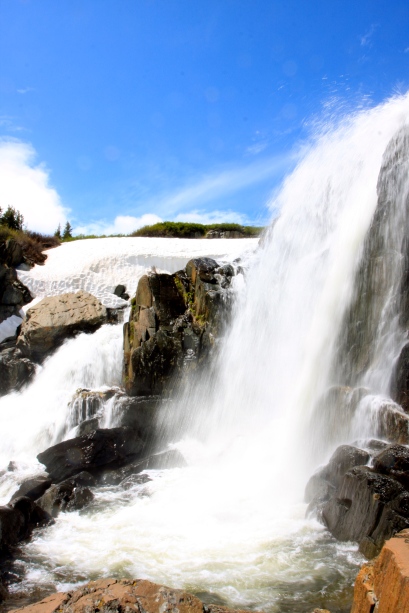 On the way back we saw Kazakhs, who were still moving up the valley with all their possessions to set up their summer homes. 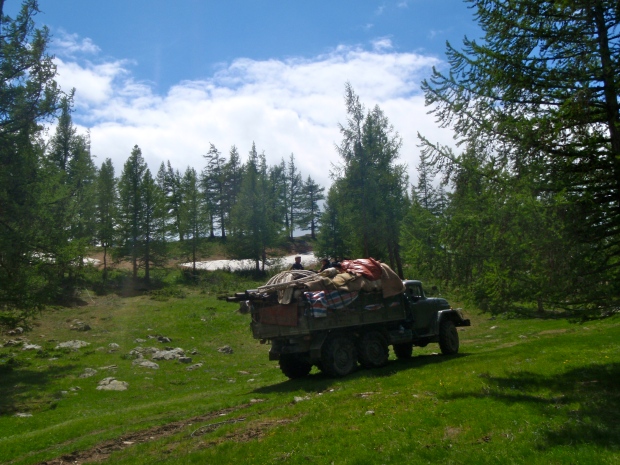 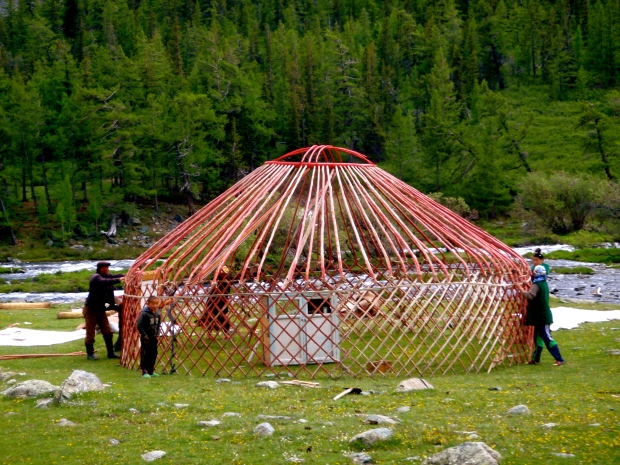 We hurried back down quite quickly as we had heard there would be a race down on the plains at 2:00. Of course it was 2:00 Kazakh time – so inevitably closer to 3 by the time things got under way. 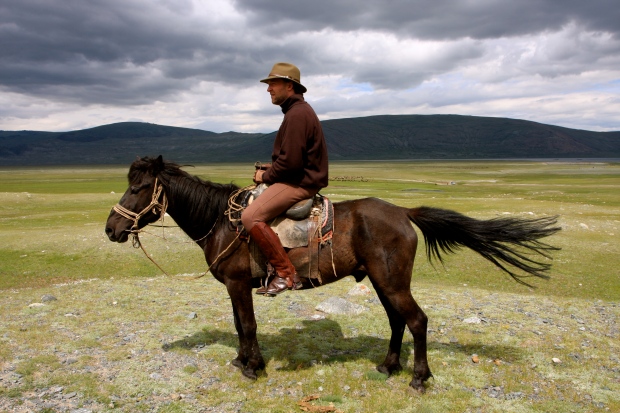 Waiting at the meeting point…. 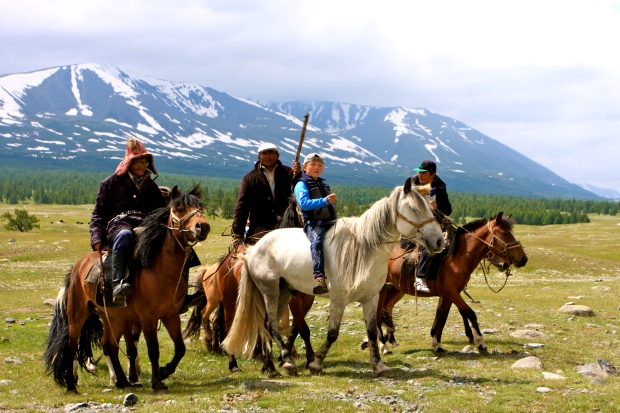 Finally the racers and (rather grumpy) organizers started arriving 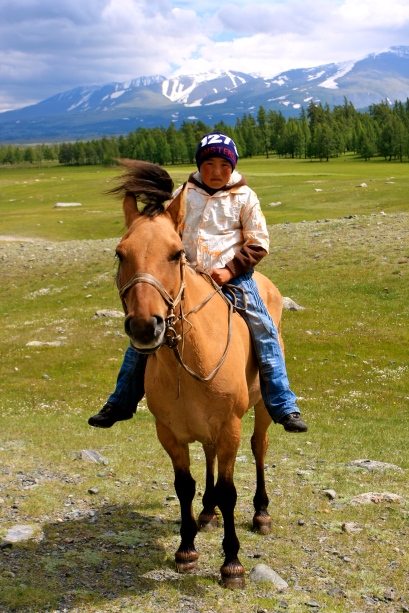 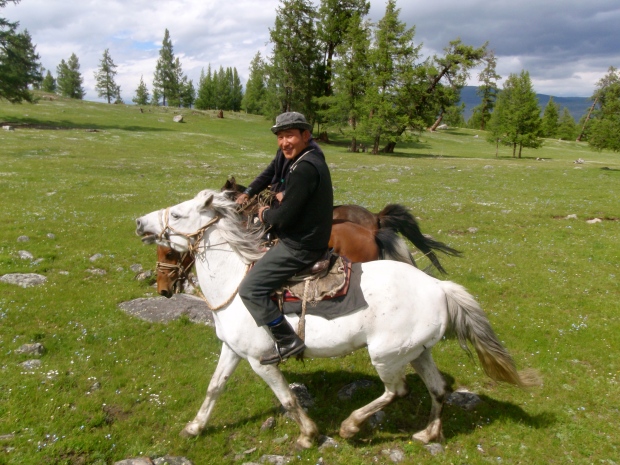 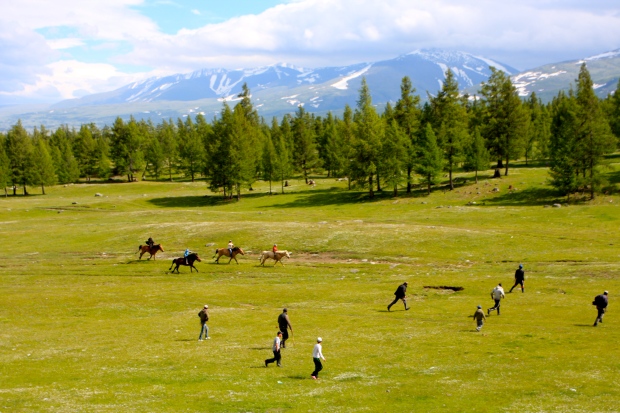 One of the race horses – a beautiful palomino and his proud owner. Note the owl feathers decorating his mane. 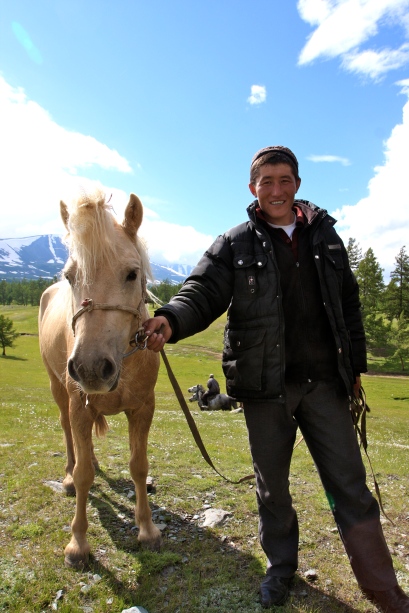 One of our horses – ‘Bruce’ – named in honor of Bruce Parry, who came to Mongolia a few years ago to film part of his great series ‘Tribe’. 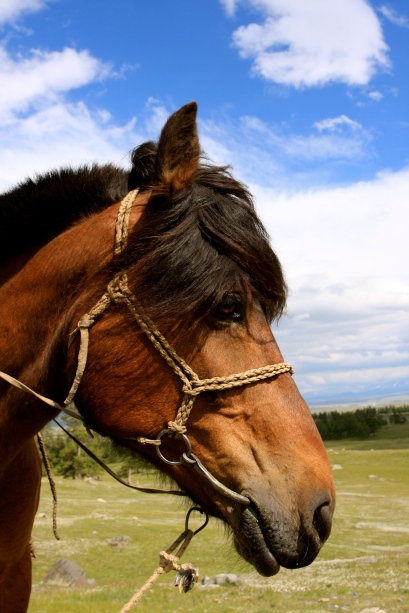 The next day we headed off to ride along the south shore of Khoton Nuur. 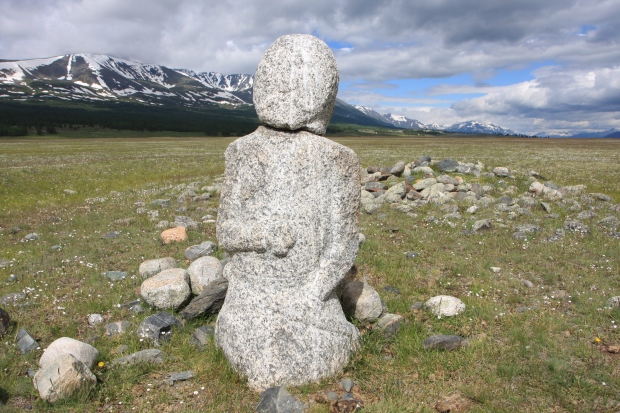 We also stopped at a ger to try fermented mare’s milk. All I can say is that I was rather glad we hadn’t had to drink it throughout the whole trip…. 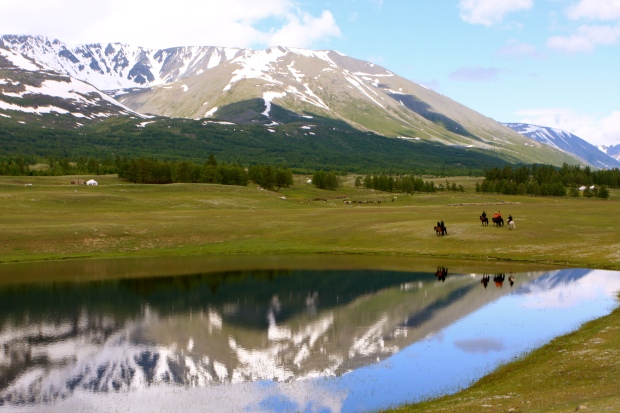 The mares need to be milked every four hours – there was a rather lonesome set of foals near the ger who looked rather sad to be separated from their mothers. 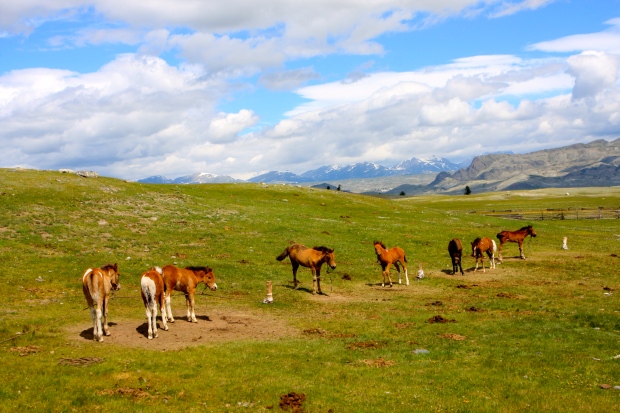 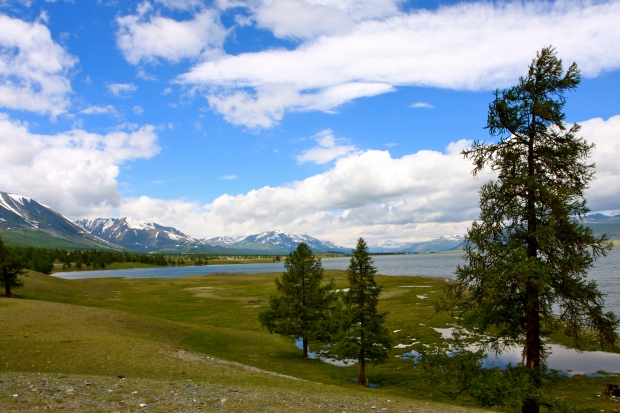 Relaxing after lunch on Khoton Nuur 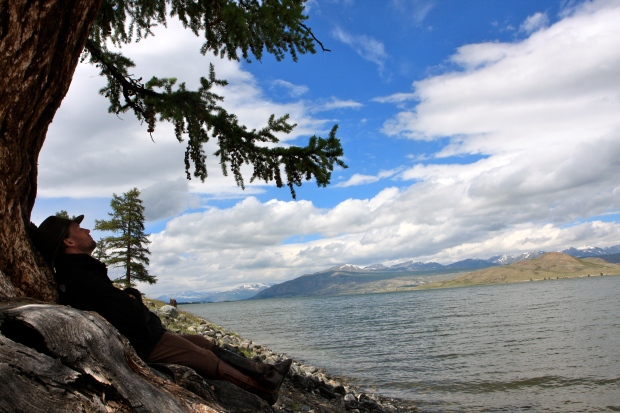 Our last river crossing of the trip on the way back to horseman one’s ger. 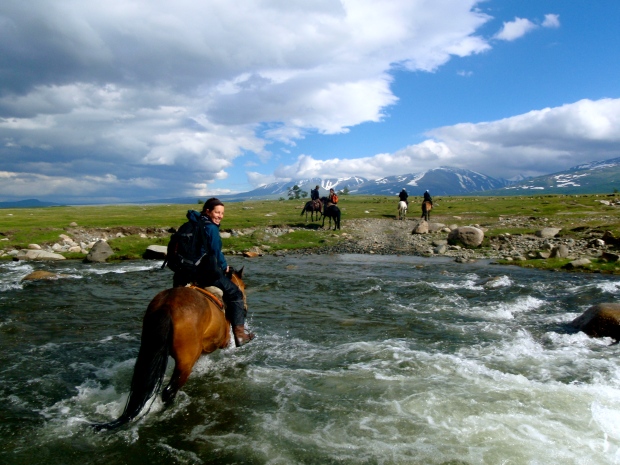 The last evening we played jump rope with some of the ger kids and a rather precocious girl from Tsengel was showing her countryside cousins how to do jump rope properly. 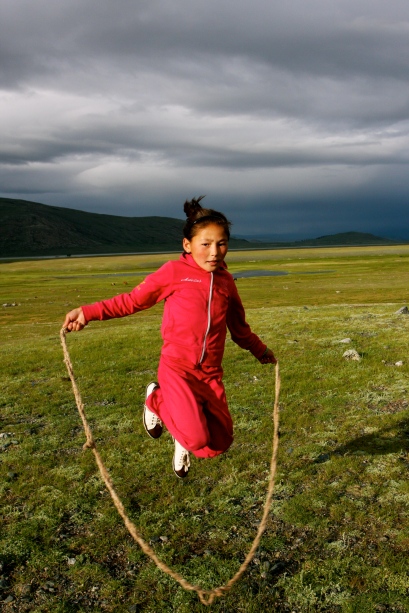 Saying goodbye to our wonderful horsemen who had warmed up as the trip went on. 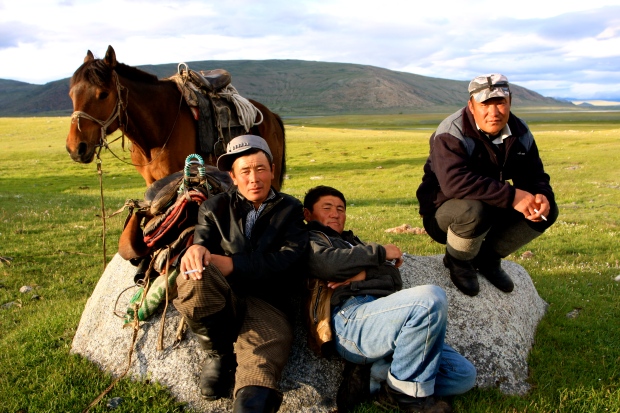 And the horses of course! 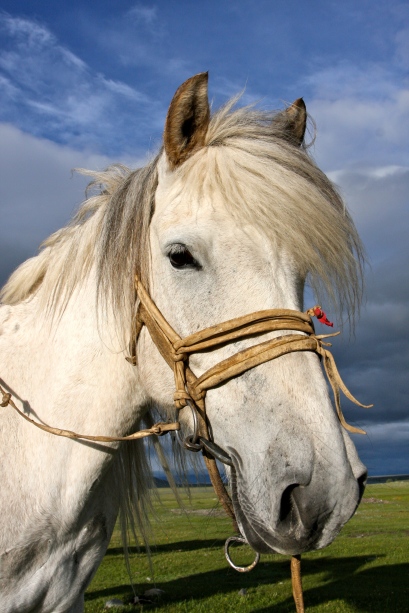 Stopping for some gas at the only pump in the Altai National Park before our 6 hour journey back to Ulgii via Tsengel in our trusty Russian van. 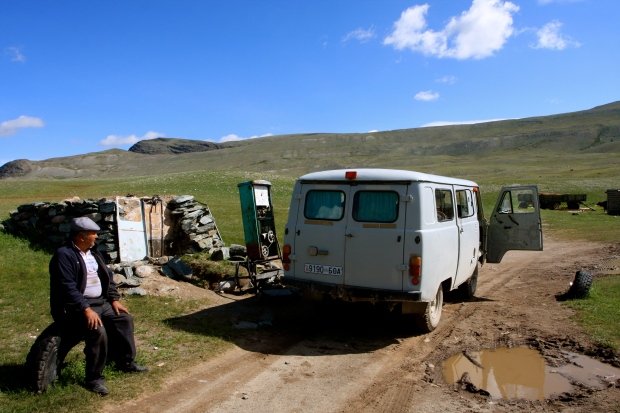 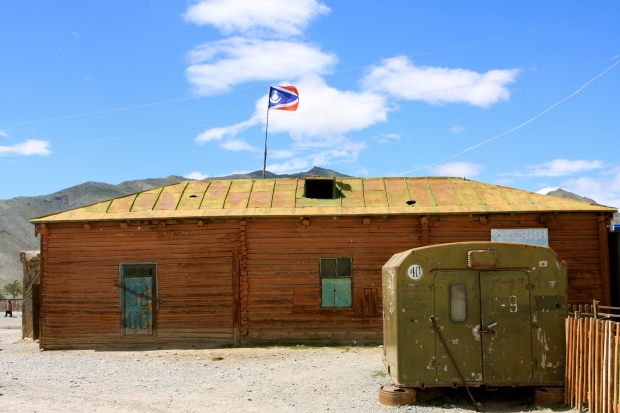 Finally, we were back in Ulgi and the end of our adventure in the far west.