Taking advantage of the sunshine and the Reunification Day long weekend while my father was visiting, we drove two hours out of Hanoi up to the nearest hills in Tam Dao National Park. Although the park was only founded in 1996, the French built this hill station back at the turn of the last century as a respite from Hanoi’s humid heat.

There are very few French buildings there now, and many more modern hotels have sprung up as it is a popular place for Vietnamese weekenders. So much so that the switch backs up the mountain took over an hour due to buses getting stuck on the bends and of course all motorcycles rushing to fill the gaps…

The views are spectacular from the town, at 930 metres. After a brief lunch, we walked up to the forest station, but sadly, the hound’s alleged ability to cope with heat was tested – it turns out even Sudanese dogs can’t walk on searing tarmac. The end result was two rather mad Englishmen and a decidedly sane dog out in the midday sun… When we return we will definitely need to spend the night so that we can attempt one of the 1,500 metre peaks in the early morning.

An old French Church (with a new tower)

The view from town 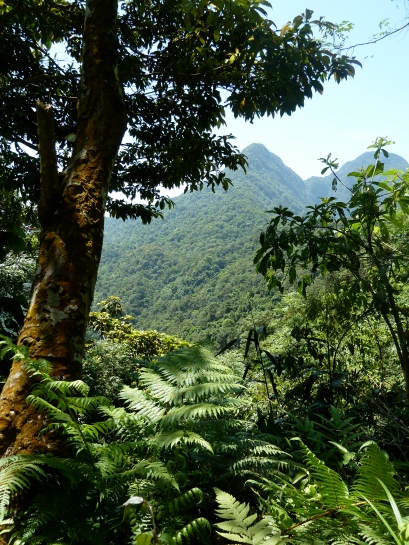 A shame there was no shade on the path as it was beautiful. It would have been a nice walk.

Luckily plenty of wildlife to see in town….

He was very happy with his newly purchased guinea fowl

Clearly the place to buy them and then of course have them plucked – I wish we’d got one!

← Portrait of a Nubian Hound
A weekend in Luang Prabang, Laos →